During the members meeting of the Hallberg-Rassy Connectie on November 17, 2018 in Loosdrecht, Frederik van der Dussen, introduced the “Poerstamper-Goblet” which was unveiled by Robbert-Jan.

Some members had addressed the board about it: Robbert-Jan Poerstamper is doing an extraordinary job as a volunteer for our Connectie! A commitment that must be appointed. The secretary, Frederik van der Dussen indicated in the AGM by means of an anecdote: “A few weeks ago I met the ‘Nelson’, the HR 43 of Robbert-Jan and Lineke at the Grevelingen. We sailed at the same time, but the Nelson had trouble keeping up with my HR 342 ‘Kittiwake’. I sent an app message in a teasing way: “just tighten the genua halyard and you can sail much better up wind…”.  As an answer, I did NOT get an app about the fact that ‘Nelson’ didn’t want to sail that high at all or an expected story about bad anti fouling or something alike …. No, I got an app about the payments for the Captain’s dinner, an app about a new member and an app about a spelling error on our website, which really needed to be corrected!  Looking back I saw that Lineke, Robbert-Jan’s wife, was now at the helm as an accomplished solo player. Instead of controlling Nelson, Robbert Jan controlled, from behind the chart table, the Association! 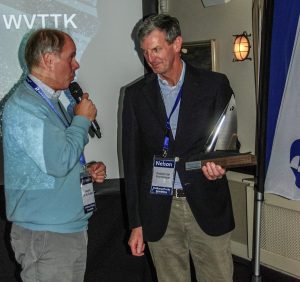 POERSTAMPER GOBLET IS PASSED ANNUALLY WITHIN THE CONNECTION

Without the knowledge of the chairman, the board has instituted a bill of exchange to appoint and praise the special efforts of Robbert Jan Poerstamper, and to have a goblet designed and manufactured for this purpose.
A real “Poerstamper goblet”, which will be awarded annually to a member who has made a special effort for the Connectie. The goblet is created to distinguish a volunteer, who has made himself or herself particularly meritorious for the Hallberg-Rassy Connectie, as an association or otherwise, as long as it has contributed to the enjoyment of the members of the Connectie.
It is up to the person who has the goblet in his/her possession has a next winner to designate. During the annual captain’s dinner or the AGM, the trophy must be passed on as a challenge trophy to another member who has distinguished himself for the connectie.

All winners will be immortalized on the trophy by means of a name plate on which the boat name and the year of presentation will be mentioned.
On a special page of the website will be kept track of who has (had) this beautiful goblet in his/her possession.

Mira Straathof from the SeaQuest 2018

This year -the first year- is after unveiling by Robbert-Jan Poerstamper, the goblet by the board awarded to Mira Straathof (Sy Seaquest) for her special commitment to building (during the stay with her family in the USA) our beautiful website. The fantastic website proved to be of great importance at the start of our association. The website is also widely praised. The association is therefore very happy with the enormous contribution that Mira has made to the association. A contribution, which can certainly be honored with the Poerstamper goblet and which she has received under a big applause of the members. 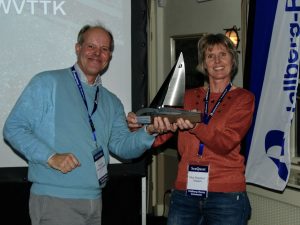 The Poerstamper goblet is given by the SeaQuest:

The beautiful goblet has been in a beautiful place in our living room for a year and now it is my honour to pass it on to the next volunteer during the Captains dinner. To someone who has been noticed over the past year for his dedication to the connection.
This is not an easy task in a club with so many fanatical volunteers, a connection with a fanatical board and where so many beautiful events are organized in one year.
But I didn’t have to think long about it. Soon I noticed the couple Tom and Lidia van de Mariste. They had an important role in organising a successful spring event in Enkhuizen. As a step-up on the Mariste, I was able to experience this up close. They also organised the Hiswa event in Lelystad for the second time in a row. Thanks to the enthusiastic efforts of Tom and Lidia, ‘Noord’ has been put on the map very well within the connection. A well-oiled duo! And with that also two birds with one stone … The cup goes to the Mariste (that name will be on the cup) but also to Tom and Lidia. Have fun with the cup next year and give it a nice spot. 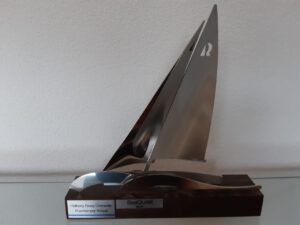 Last Saturday we enjoyed a fantastic day in Antwerp.
Lidia and I were very surprised that Mira from the SeaQuest gave us the “Poerstamper globlet”.
We were thanked for what we did with great pleasure for the connection. We are really honored with it and we have a whole year to think about who we will hand over the cup to next year.
We are preparing for a new year with great events and hope to meet many of you again. 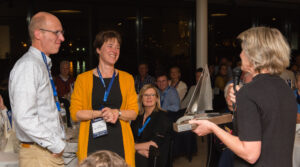 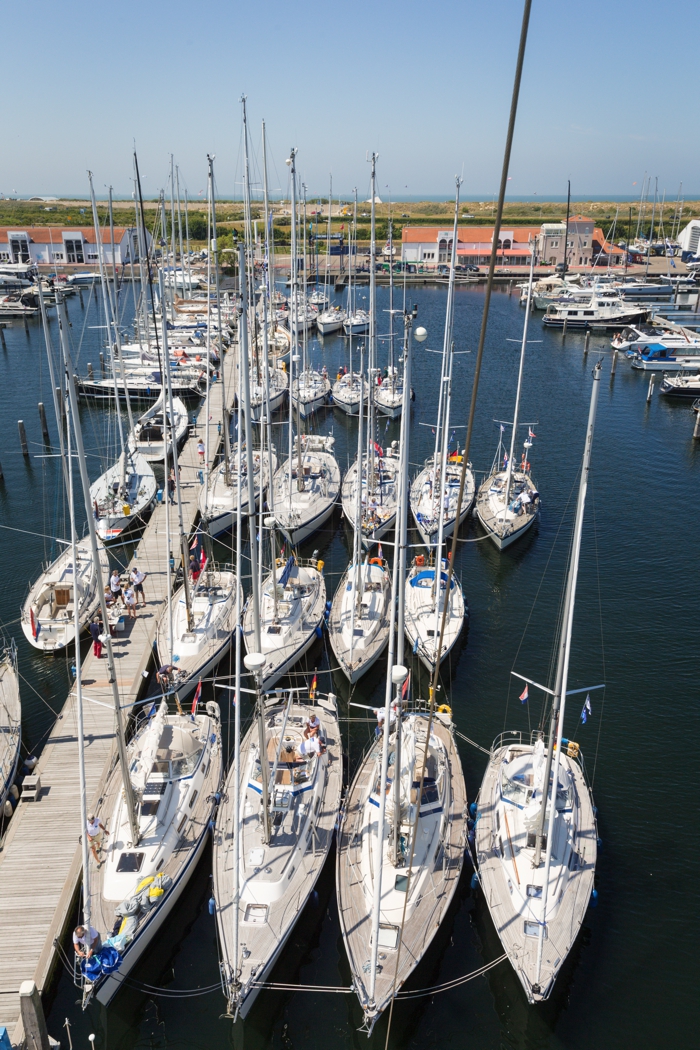 Good ideas for new content and improvements of the website are always welcome! We appreciate the contribution of members.

You can send your idea or content to: redactie@hallbergrassyconnectie.com.